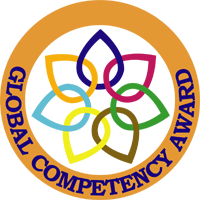 With the advent of Teaching Learning 2.0, good educators can be transitioned into great ones only by ensuring their Continuous Professional Development. Our Principal, Ms. Ashu John has excelled in contributing towards & extending high quality inclusive learning opportunities for the educators all across the globe by facilitating the educators with meta cognitive & experiential approach in learning sphere,even during this pandemic.. Acknowledging her outstanding contribution in lifting others & making this World a little more humane and happier, Ms. Ashu John, our Principal, has been also featured in the magazine 'Trailblazer', an open forum for the teaching fraternity.

AMBASSADOR OF THE UNITED WORLD 2020

We are immensely elated to share that Ms.Ashu John, Principal, St. Mary's Christian School has been honored as #AMBASSADOR OF THE UNITED WORLD 2020 !! #Catalyst for Positive Change in the World. She has been featured on the Cover of Special Edition of the outstanding magazine 'The Explore Journal' with eminent world leaders.

Congratulations Nishcay Jain on winning Sanskrit Olympiad certificate organised by Delhi Public School Raj Nagar. We are proud of you!

Congratulations Nishcay Jain on winning Sanskrit Olympiad certificate organised by Delhi Public School Raj Nagar. We are proud of you!

Congratulations Ishika Saxena on getting a certificate for participating in French Poem Recitation. Keep rocking!

Congratulations Ritika Saxena on getting a certificate for participating in French Poem Recitation. Keep rocking! 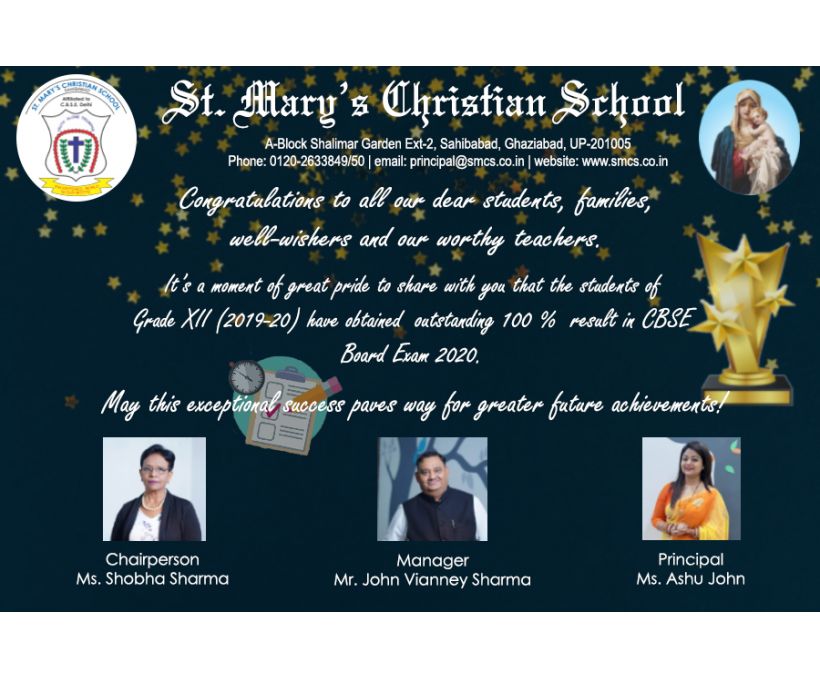 CBSE Board Toppers of SMCS

Congratulations to all our dear students, families, well-wishers and our worthy teachers. Itâ€™s a moment of great pride to share with you that the students of Grade XII (2019-20) have obtained outstanding 100 % result in CBSE Board Exam 2020. May this exceptional success paves way for greater future achievements! 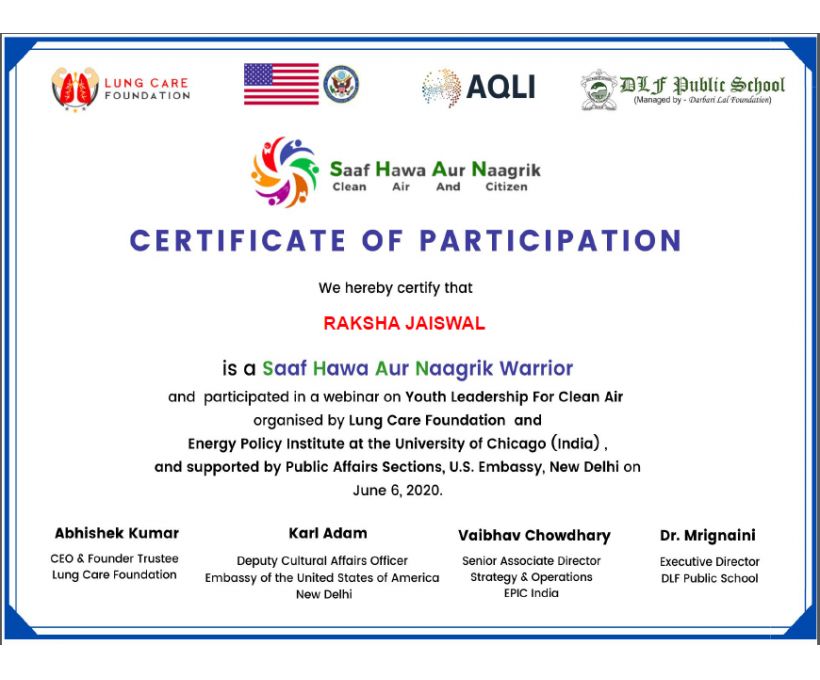 We appreciate our Vice Principal Ma'am to participate and became a Saaf Hawa aur Naagrik Warrior. Proud to be a Marian... 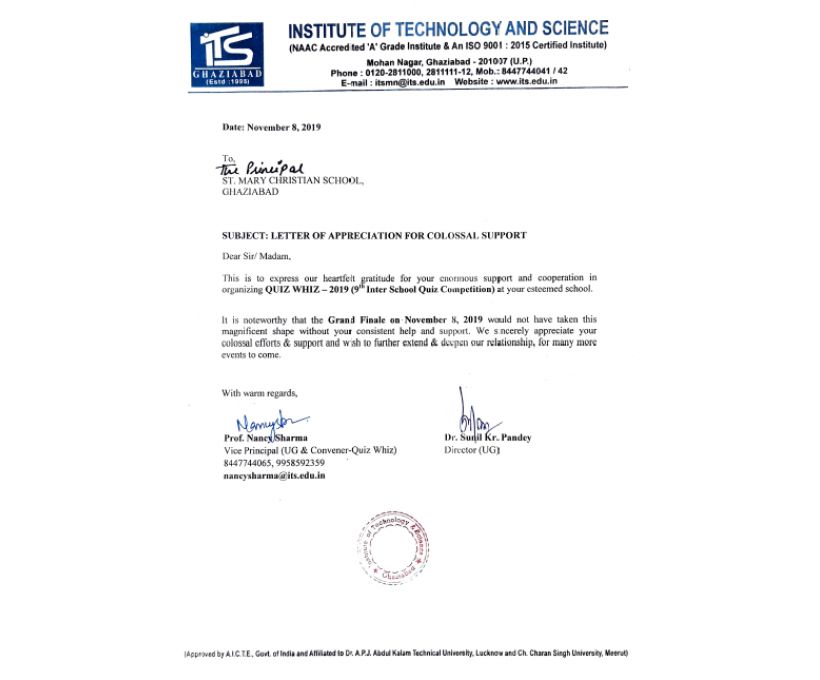 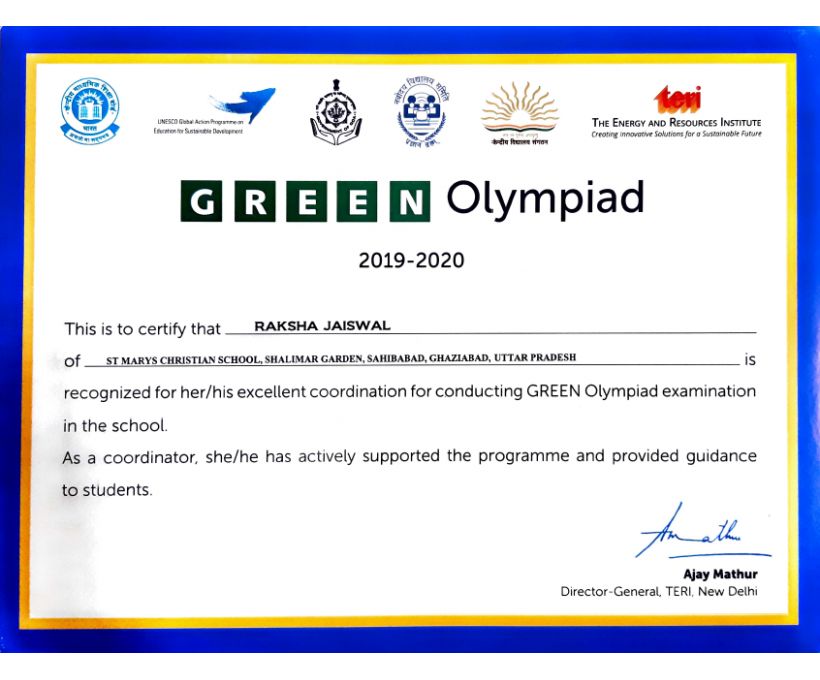 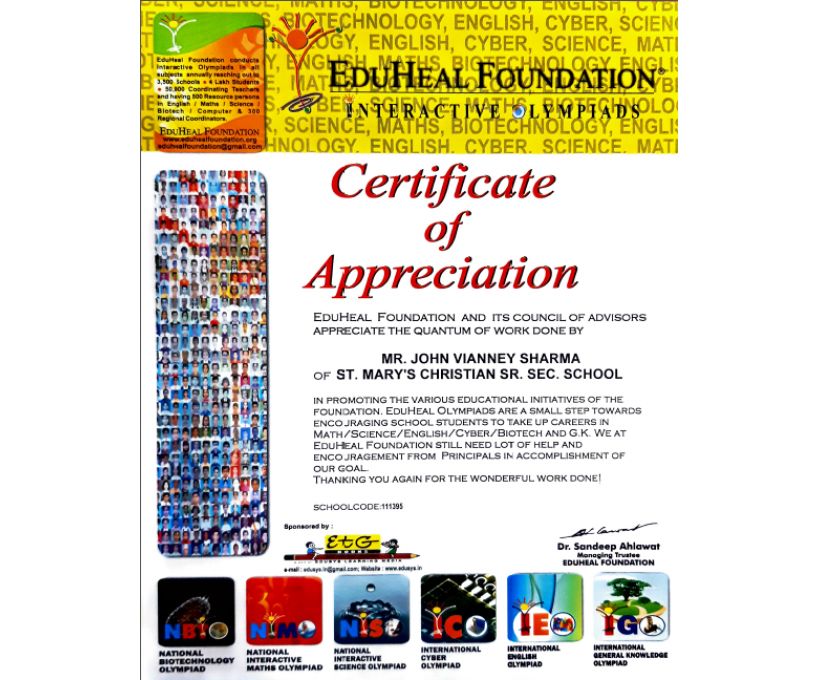 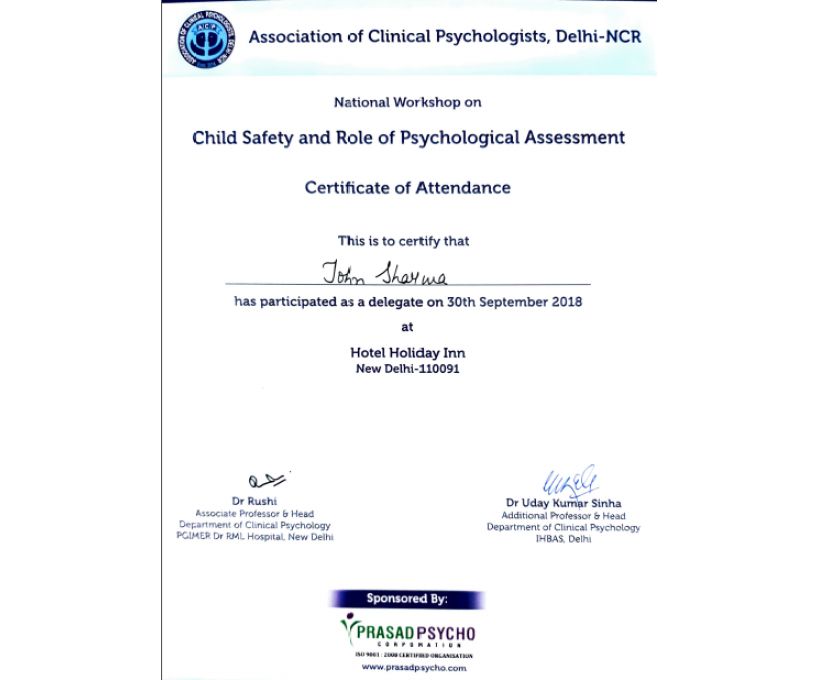 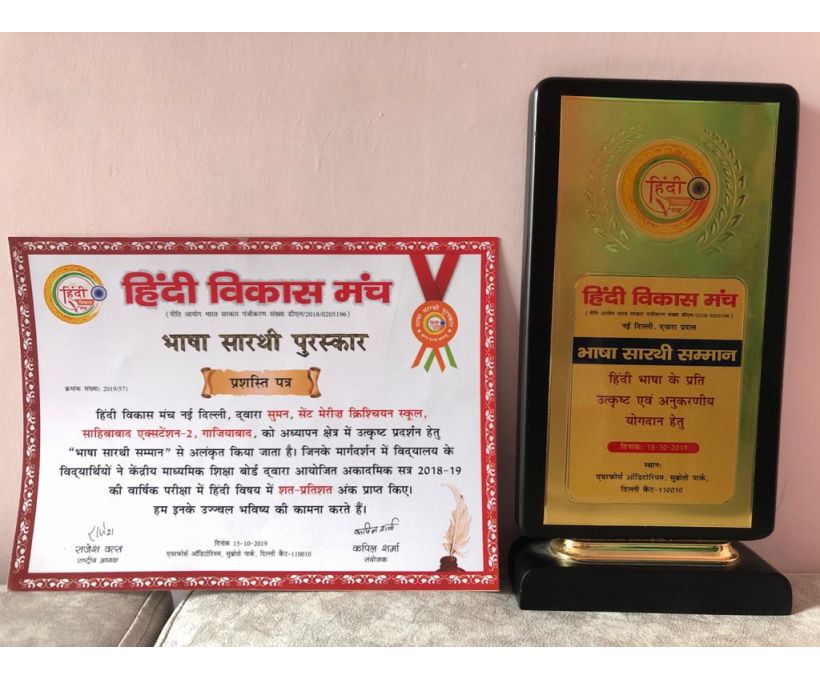 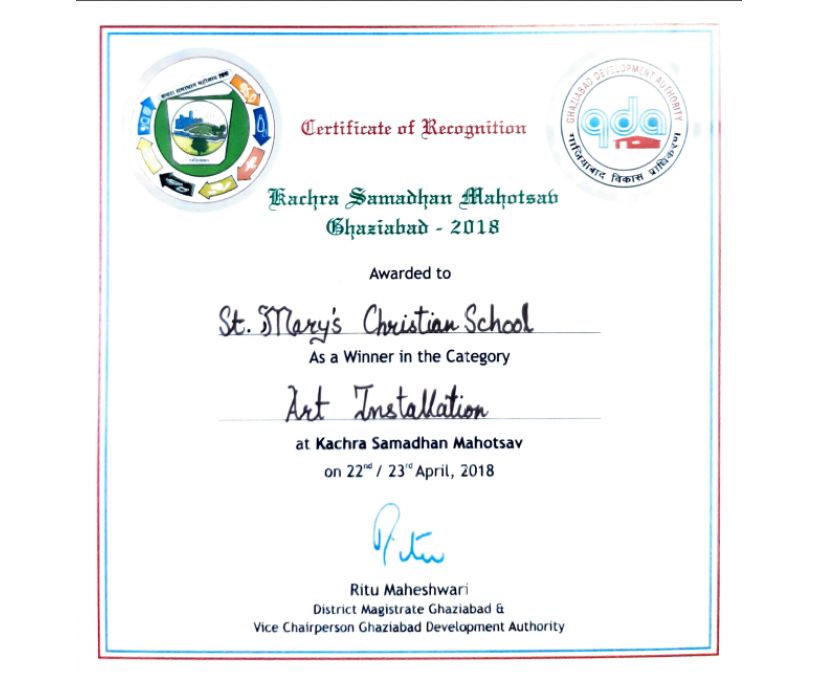 An exhilarating and enthralling moment for all of us as St. Mary's Christian School has been acknowledged and appreciated by the eminent personalities and public of Ghaziabad district during 'Earth Day'. The 'best out of Waste-Battered Teddy Bear' which was made out of waste items communicating message for saving and respecting girl child was displayed during the 'Ghaziabad Kachra Samadhan Mahotsav' in Ramleela Maidan. 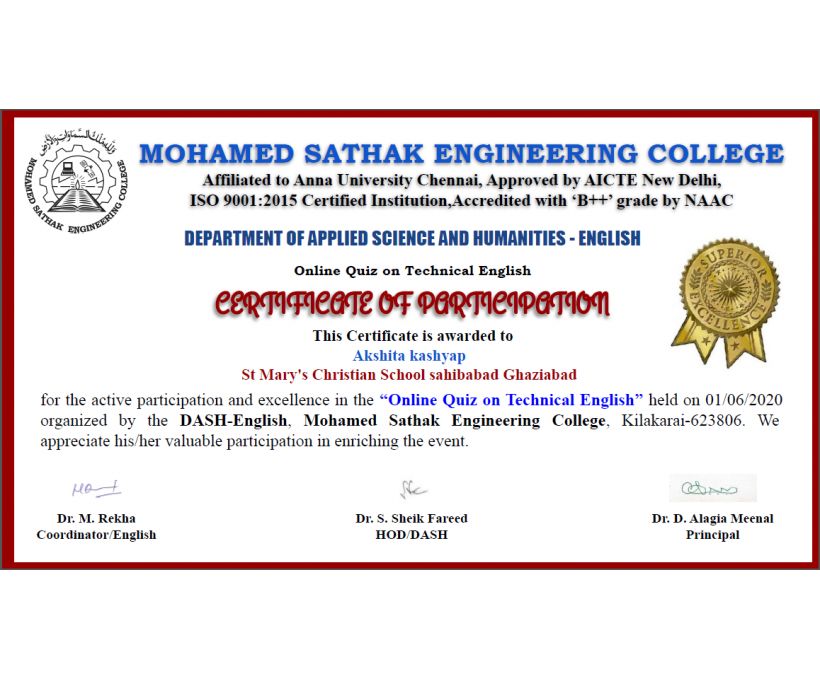 SMCS Felicitated the Hard Work of Akshita kashyap for participating in the Online Quiz competition on Technical English... Proud to be a Marian! 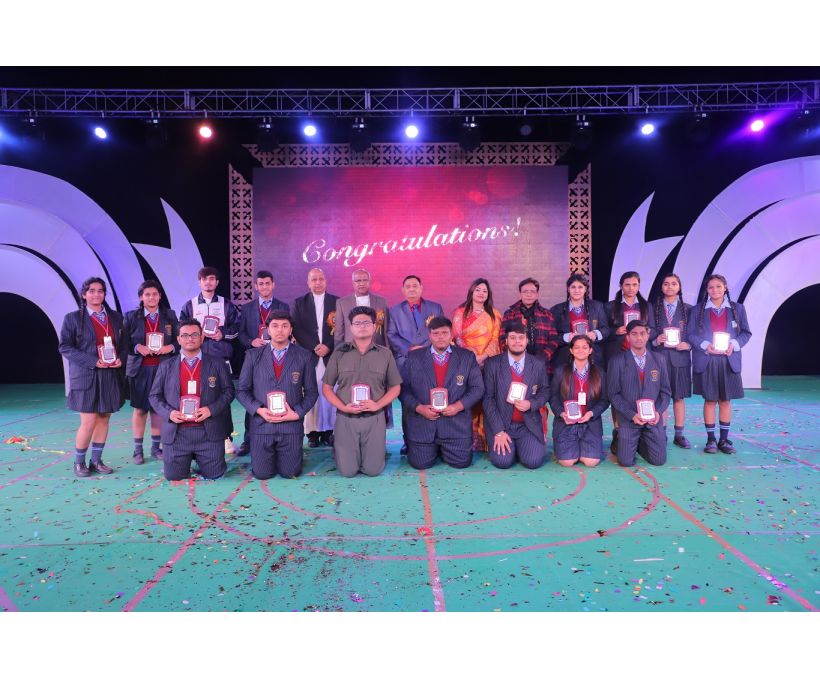 SMCS Felicitated the Hard Work of its Academic Scholars on the extravagant Silver Jubilee Celebration. 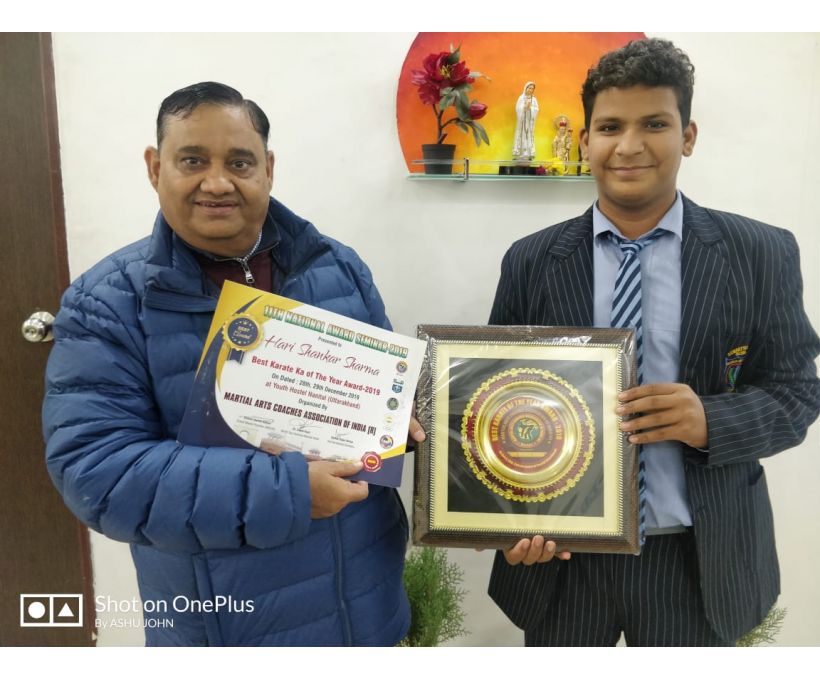 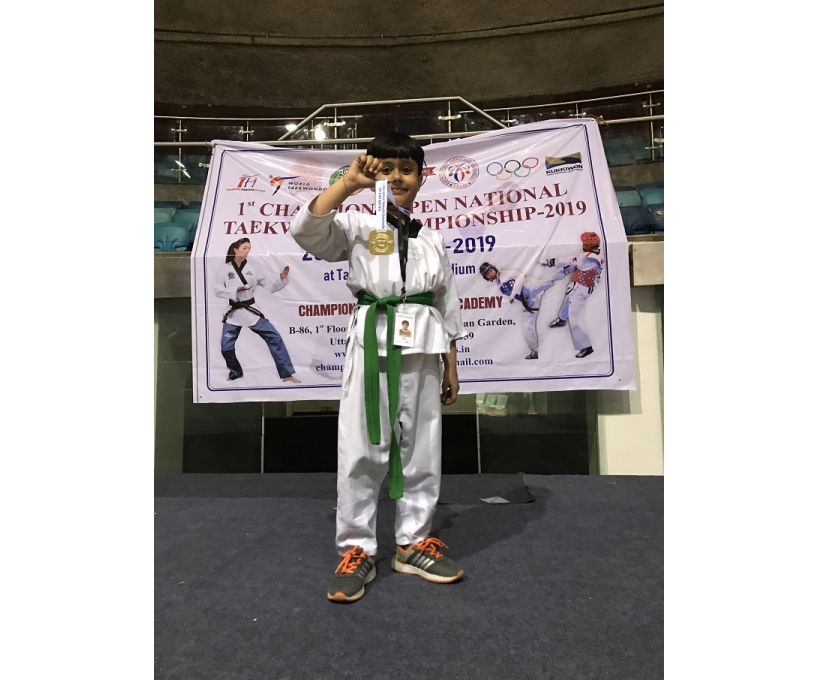 SMCS takes pride in sharing the news that Marian Abeer Verma IV B has won Gold Medal in National Championship of Taekwondo which was held on 25th April 2019 in Talkatora Stadium. The SMCS family is proud of you. Kudos to all Marian Abeer! Regards Manager SMCS

SMCS feels ecstatic to share the news that the basketball team of the school participated in the 3rd BSMG open National Inter School games and Awards 2019 organised at the Poorv Delhi Khel Parisar, Dilshad Garden on 25th July 2019, Thursday. The team put up a great show and was successful in achieving the bronze medals. Congratulations to the team and the PET- Sandhya Bisht for putting up a great match. 1. Ayush Kumar, 2. Ratna, 3. Harshit, 4. Aryaman, 5. Angel, 6. Sahil, 7. Uttkarsh Gupta, 8. Uttkarsh Mishra, 9. Waseem, 10. Mridul, 11. Rachit, 12. Vardan 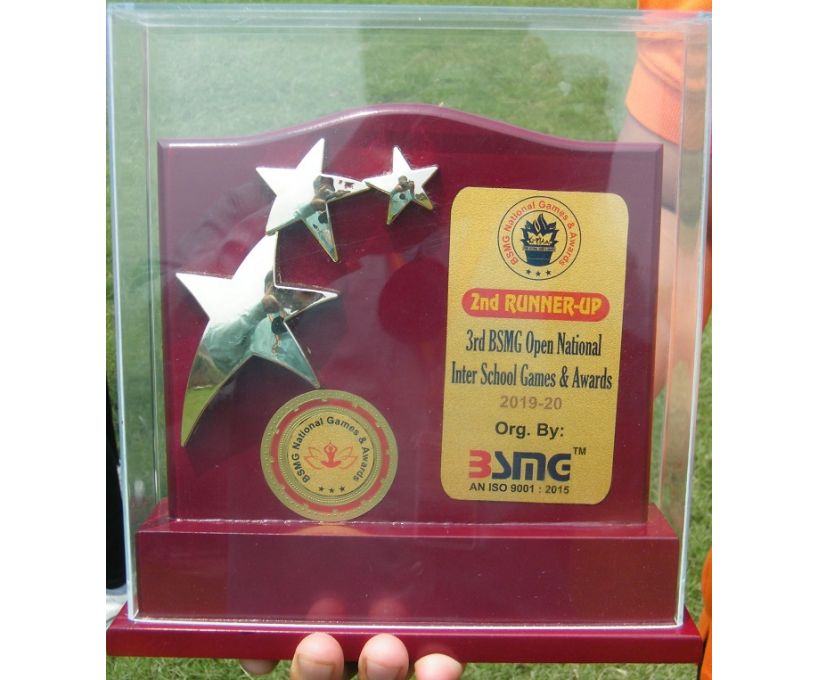 SMCS takes pride in Sharping the news that Marians Suhani Raghav XII B have won Gold, Palak Mavi VIII B and Ayaan IV C, Silver and Mohd. Shahbaz VI C have won Bronze in yoga at 3rd BSMG Open National Inter School Games and Awards 2019 held at poorvi Delhi Khel Parisar Kudos to our Marians! The SMCS family is proud of you!!

Bosco Public School, Paschim Vihar had organized a Skating Competition where our Marians actively participated in the 2nd Inter School Roller Skating Championship which was held on 28-29 Novemberâ€™2014. There were three categories and around 22 esteemed Schools and skating clubs participated in the competition. 19 students from SMCS took part in Skating Competition & shown a phenomenal participation. ï¶ ACHIEVEMENTS OF MARIANS:- â€¢ Yogita Singh of class VI B (10-12) in Inline won 2 Gold Medals in short and long distance races with an overall Championship Trophy. â€¢ Rohan Sharma of class IX B (12-14) in Inline won 1 Gold Medal in short distance race and 1 Silver Medal in long distance race with an overall championship trophy. â€¢ Md. Arsh Siddique of class IV A (8-10) in Quads won 2 Silver Medals in short and long distance races.

The Marians won accolades again by winning the FIRST position in Group Dance Competition on Theme-Nari Samman at the Yamuna Sports Complex on 31st August 2014. The event was organized by Radha Madhav Seva Sansthan , an NGO. A team of 38 Marians participated in this Event. The Event saw mesmerizing performances by many schools & Dance academics but Marians was at par excellence. We did full justice to the given theme Nari Samman-by portraying the different shades of women in celebrating woman hood. Few among the notable guests were : Ms. Meenakshi Lekhi (Mayor), Mr. Jitendra Mahajan (MLA) , Mr. Jitendera Singh Shanti (MLA) , Mr. Ranjeet Kashyap (MLA) and Mr. Jay Prakash (Dy. Mayor) The star attraction was Mr. Kuldeep Sareen (CID fame) Congratulations to the winning Team-The students and the Teachers !!